Our first launch and demonstration of what the new OLab4 Designer, the authoring interface for scenario development, is taking place today at the AMEE Conference in Vienna. 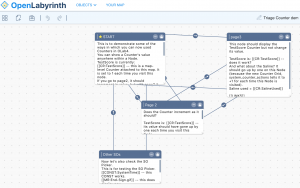 The main concept mapping tool will be familiar to OpenLabyrinth v3 authors. We have retained its basic useful functions, made it simpler and more accessible.

To take a look at some of the demonstration scenarios that we have created, go to https://demo.olab.ca/player/olab — login as ‘ltopps‘ (that’s with a small L at the front for Learner) and with a password of ‘learner‘ when asked to sign in.

There are just a few simple demo cases to start with. We will build more to demonstrate OLab4’s new capabilities.

In OLab3, for advanced authors, it was possible to make your scenarios quite complex and interactive. By using combinations of Rules, Counters, Timed Popups etc, you could get quite creative.

But it was quirky and limited. Debugging was a real challenge is things did not behave how you wanted. It was possible to embed some Javascript into OLab3 but it was still difficult and risky.

In OLab4, we have taken a quite different approach. We have come up with a way to embed Javascript safely into scoped objects so that they can be reused.

These Script Objects can interact with OLab4’s REST API in much greater detail. This allows advanced authors to be more creative in manipulating how their scenarios work.

We have a few taster examples to show at AMEE. See you there.

Even in OLab3, it was possible to reuse some of the objects from one scenario to another, to some extent.

We have greatly extended this concept. You can create objects, such as Questions, that can easily be reused across multiple maps. We found that many authors were using objects over and over again. This is not hard with image files and fixed text. But it was not possible with Questions and Counters.

OLab4 changes that. You can set the scope of a Question or a Counter so that it is limited to a single map (like OLab3) or you can share the scope across multiple maps.

Server-level scope means that an object can be shared by any map on the same server.

Global-level scope will allow us to create a central library of objects that any author can use around the world, on any OLab4 server.

The Scoped Object concept is being extended to a number of items in the OLab4 arsenal:

In the OLab4 Designer, we continued with the popular concept mapping tool that was first introduced in OLab3. 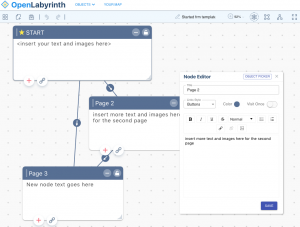 We have simplified this and made it cleaner. Those who are used to how the OLab3 Visual Editor worked will feel right at home. Simply join the dots to create your pathways.

Yes, it has been quiet over the summer… too quiet.

The good news is that our teams have been beavering away (well, this is Canada) at the authoring interface for OLab4 scenarios. We will be introducing the OLab4 Designer at the AMEE Conference in Vienna.

In the meantime, we hope to release some teasers over the next few days. Watch this space.